THE STORY OF BAD BUSINESS - PART 2

Bad Business Line up 1 was ended, but Michael and Gert had decided to continue the band.

The logic behind was simply the music and the passion to keep on playing music together.

The guys were not the musical magicians in Bad Business Line up 1, but straight forward hard Rock´n Roll was the way to go.

To start up "new business" - Casper from Line-up 1 had supported drum tracks for 3 songs, and Michael and Gert established a temporary small studio setup at Michaels parents house to finish the songs.

Dedicated efforts was invested and they made ends meet including minor "hick-ups" in the songs. 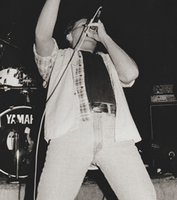 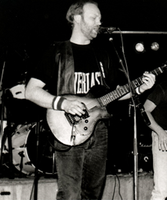 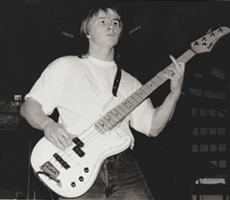 During the work on the 3 demo songs, Michael & Gert also started the search for new band members to the remake of Bad Business.

They were less experienced players than the previous guys from Line-up 1, but the 2 guys were fit to fight to join the band and Bad Business was now 4 members. 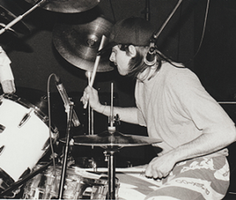 The 3 demo songs made by Gert & Michael was a solid start, and it didn´t take long before other songs came along.

The 4 guys rehearsed with great optimismn and searched for gigs to come along.

And a gig did came along with the pleasure for Michael and Gert to realize the work of making a new line up was about to stand a test, and not least exciting for the new Bad Business members to look forward for a chance to play live.

And so the 4 guys came to play live on a local scene.

There was a need for a guitar player more in the band.

Morten had for some time searched for a band and jumped straight into Bad Business with great enthusiasm and a noisy guitar sound - for the good cause of moving forward together with Bad Business. 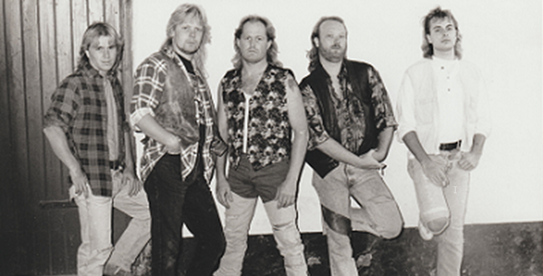 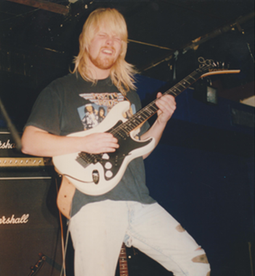 Morten appearing in one of his first gigs with Bad Business.

Now with 5 guys in the band, line-up 2 worked on to do recordings in their own studio.

The Studio was a great place featured with a 16 track recording setup and the band produced a 5-song demo cassette tape intended for distribution to acheive more gigs and to promote the band.

Good freinds often came by to offer a helping hand and to support with equipment for recordings and mixing. 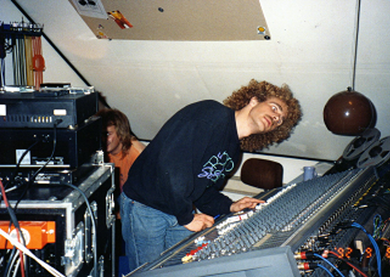 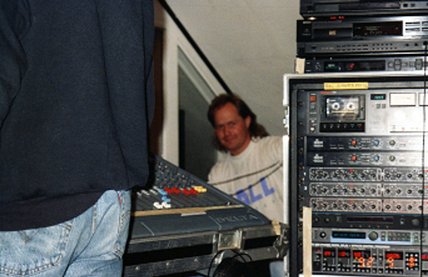 The work payed off and along came a project from a music producer who wanted Bad Business to appear on a CD promotion release featuring new upcoming bands from the Nordic countries.

Bad Business entered the project and experienced their first time to work in a professional recording studio.

The recordings was fairly fast made, but the project itself had a long waiting time, and it was finally released so Bad Business could appear together with other bands from Nordic countries on a official promotion CD release.

It really never paid anything back, but it was an experience on the road to fame and glory.

Optimistic youngsters in the studio 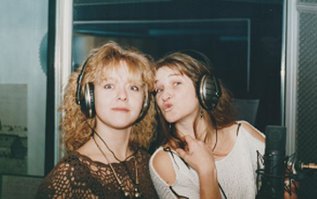 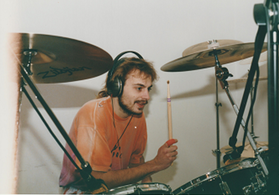 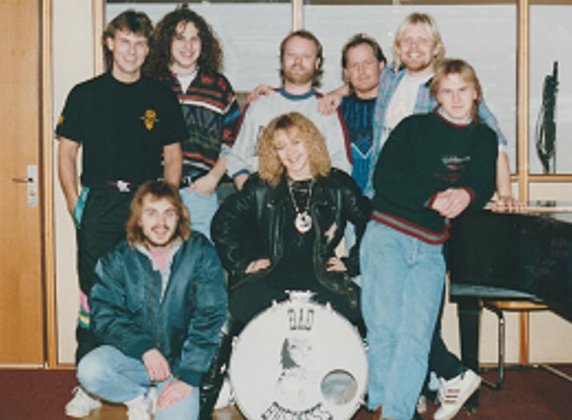 They also later supported the band live for shows and Bad Business want to say thanks for that !

The influences from the “originally” Bad Business line-up 1 was fading and the activities for Bad Business Line up 2 was in full focus for Michael and Gert. Together they had raised the band again and the interest for Bad Business was increasing.

Demo tapes were sent out to get gigs, and record companies was approached for the try of getting a record deal.

Sometimes there were answers in return - but always like - "no deal at the moment" - wrapped with wishes for good luck.

Thank you for your request. We have now listened to the tape and have come to the conclusion that when you have got the recording contract, and still are sure of using the version on the tape then we will contact our department in Los Angeles and get back to you with our final answer for your request.

The Bad Business signature “vulture logo” came along and was used first time to create "home style" markedting material to promote  the band.

A printed 4 page folder Band presentation folder was made to support the demo tapes, and many sets of tapes and folders was posted.

The marketing material worked and gigs began to come along.

Some of the establihed Copenhagen stages reacted and offerred Bad Business a chance to come and play, and the guys were now facing to perform on the reel music scene.

Bad Business did also execute some private gigs at motorcycle clubs, as the music style was much suitable for such kind of events. 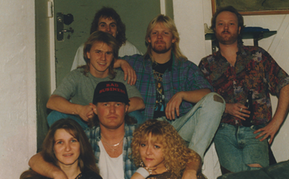 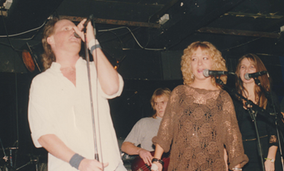 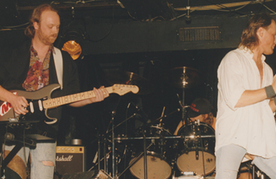 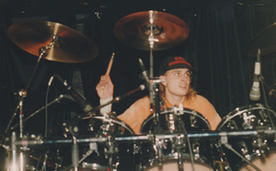 Following along came a open air show in the heart of Copenhagen where Bad Business appeared with other rock and metal bands.

Fælledparken was Indeed a big outdoor stage for Bad Business to fill out. 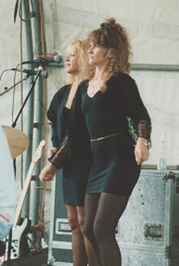 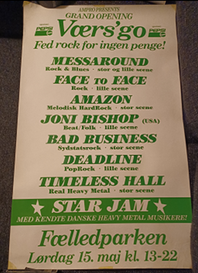 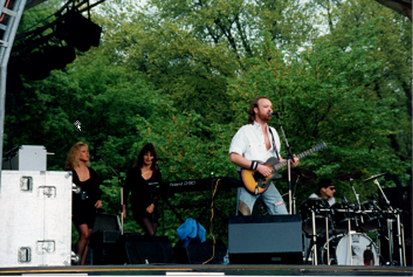 Maybe one of the all time best shows by Bad Business back in time was a gig at “Ringsted Festival”.

Bad Business appeared to play inside a big tent, as the last act before the main attraction band would highlight the festival.

By luck heavy rain started when Bad Business entered the stage, and loads of people rushed into the tent to take shelter, and  conviniently provide "full house" that night for the Bad Business appearence.

Great crowd - great sound - great light - in fact everything around that show was great.

And more featured shows came along.

Named in the press between Depeche Mode and Bruce Springsteen felt almost like being famous.

(regardless the misspelling of the band name - it was Bad Business) 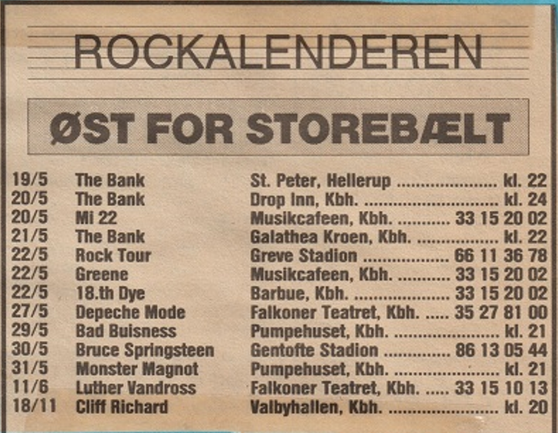 Now it is appropriate to mention that in between the many activities for Bad Business, the band came to meet up with legendary "UFO bass player" Pete Way, who at the time had taken resident in Denmark.

Pete became a friend of the band and the plan to record a 4 track Demo CD to feature him playing bass for Bad Business came on.

This story is off course special for Bad Business and it will be featured in a dedicated chapter for more detailed coverage.

But the promo CD was made and even Mr. Way left Denmark shortly after making the CD, Bad Business kept the freindship with him for many years. 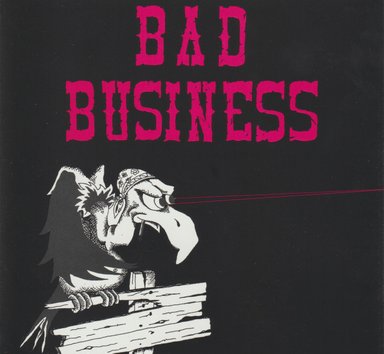 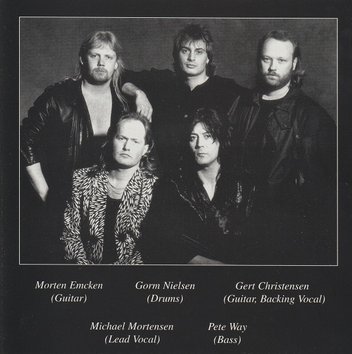 THE BEGINNING OF THE END FOR LINE-UP 2

After been riding on positive waves and good gigs around Copenhagen, Bad Business came to face new challenges.

The band had played shows using songs made mostly in the early beginning of Line-up 2, and it was time to move on with new music.

New song ideas were really not missing, but the band were not all on same page for how the style should evolve.

The band tried for some time to find a direction, but it was not successfully and discussions to change band members began instead to sneak in, which leaded to bad decisions for Bad Business.

A new bass player to replace Steen Molzen was the first approach to try out.

Steffen "X" (since its been so long only his first name is memorable) joined Bad Business to play bass.

It worked for a short period of time to do some gigs, but it was not the right player for Bad Business in a longer perspective.

Steffen managed to hang in at the Copenhagen club “Alexandra” where Bad Business supported the ACDC cover band “Dirty Deeds”. 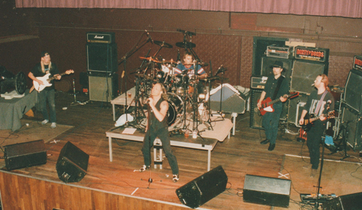 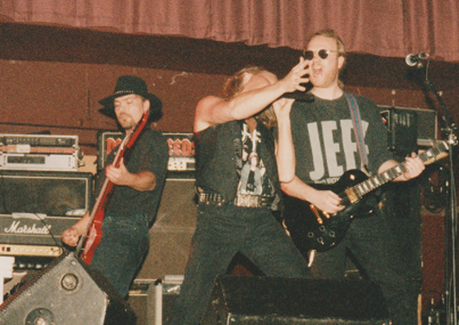 But even with great paitience it became hard to continue the search for a permanent bass player.

There were some applicants showing up to try play the songs, but no one brought "the magic" the band were looking for.

At some point after rehearsing with different potential new bass players, drummer Gorm Nielsen decided to check out, and thereafter

things became extra complicated in order to keep up the spirit in the band.

Now it was also drummers to be tested and Bad Business was slowly dying every time a new player with lacking skills showed up.

Bad Business were stucked, and even in between the core members Gert, Michael & Morten there was no longer a firm plan for what

to do. It was very little motivating to make new songs without drums and bass. and there was no such in sight.

At this point long time guitar player Gert decided to stop and "call it a day" for music projects..

Not an easy decision - but there were "no fuel left" for Rock`n Roll. 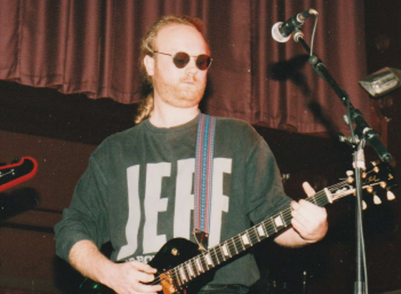 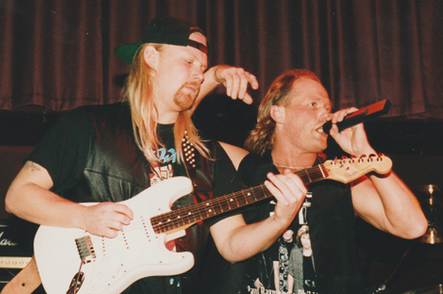 Michael and Morten tried a couple more times to play further with Bad Business applicants, but the torch burned out and the closing

THE AFTERMATH OF BAD BUSINNESS LINE-UP 2

The difference between Bad Business Line up 1 and Line up 2 closing down was sighificant.

Line-up 1 stopped before the band really unleashed the potential, where Line-up 2 reached a number of goals set from the beginning, simply driven by pulling the long stretch of dedicated work and passion.

Gigs were played - songs recorded - and a true rockstar became a freind of the band !

The end of Bad Business never caused any troubles in between band members, and relations has been kept alive ever since.

It was for many years not a topic to discuss if Bad Business should raise again, but when time came it was not a hard desicion.

We just did it - and so the "Return of Bad Business" and line-up 3 - will continue in story part 3.